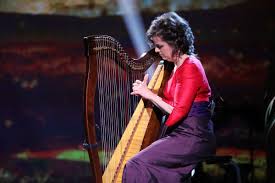 I arrived home jet-lagged and groggy early-doors on the Aer Lingus flight from New York on Sunday morning and, if truth be told, I wasn’t totally sure I had done the right thing by agreeing to go to the TG4 Gradam Ceoil in Belfast’s Waterfront Hall that evening.

But, boy, am I glad I recovered from my Irish Echo 40 under 40 exertions in the Big Apple to take my seat for the third annual visit of the TG4 extravaganza to Ireland’s greatest city.
Indeed, the guy who cut the ribbon on the Waterfront Hall back in 1997 would have been pleased with the TG4 Gradam Ceoil tour de force.
For he once declared that “there are few responsibilities more absolute than those which flow from custodianship of a language and culture”, adding that society is “immeasurably enriched by its Gaelic dimension”.
And so it was in the resplendent Waterfront Hall — An Halla Cois Cladaigh —  where the cream of our traditional music gathered for what are the global awards for traditional musical excellence.
Presenters Doireann Glackin and our own Dónal O’Connor marshalled a merry band of maestros representing the traditional music family at home and abroad — before joining in the inspiring, all-hands-on-deck finale with their trusty fiddles.
And what a stellar line-up it was. For these were not just trad troubadours whose genius would grace any stage where Irish music is celebrated but each of them in turn was exemplary in passing on the tradition to the next generation.
Mayo harpist Laoise Kelly, who reminded us that the cry in Ireland from our betters was once, ‘hang the harpists and destroy their instruments’, not only excels at our national instrument but has founded an international school for an cláirseach on Achill Island. No better person to pick up the Musician of the Year Award.
Ned Kelly from Tipperary, a box player, has inspired an entire community to use music to give hope with his ‘In Tune for Life’ traditional orchestra — scores of whom played from the balconies at the Waterfront Hall as his accordion raised the roof in Béal Feirste Cois Cuain.
Then there was the golden-voiced if heartbroken Lilis Ó Laoire from the Donegal Gaeltacht whose voice and values connect us with an area where language and song are the very backbone of the community. Lilis had buried his mother Bernie the previous day and his presence paid homage to all those who had acted as a bridge of song from the past to the present day. His rousing closing number – a traditional ditty rewritten to mark the event — was a highwater mark of an outstanding evening. Ón osna is sine a thig an ceol is binne, as Seosamh Mac Grianna observed (From the oldest sigh comes the sweetest music.)
Full marks to the set-designers who used images of Belfast to illuminate a glittering gathering – the shards from the surface of the Titanic Centre, the dome from the Dome of Delight and the yellow cranes in comic-book style —  and kudos also to TG4 for bringing these awards to Belfast for the third year in a row. Maximum Respect. Meas Mór.
Both those who attended and those who followed the live broadcast on TG4 were, indeed, “immeasurably enriched” by the Gradam Ceoil Awards, as the VIP who opened the Waterfront Hall had predicted.
And who was he?
Prince Charles, of course.
You can watch back at Gradam Ceoil on the TG4 player.