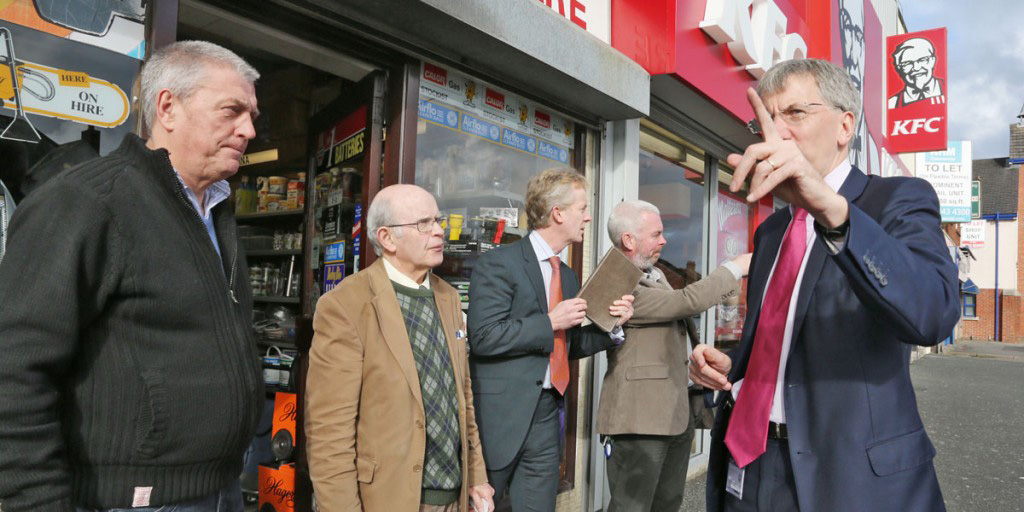 Finaghy crossroads could be set for a recession-busting makeover after a local Councillor called  for a 21st century facelift, similar to the one carried out in the centre of  Andersonstown.

“This is a vibrant area patronised by both communities, but the broken pavements, pools of water gathering on damaged tarmacadam footpaths, blocked drains and boarded-up shops are all making life more difficult for traders battling through the recession,” he said. “I believe a public realm project – similar to those in the city centre or in Andersonstown –  could transform the area and give it the type of public realm it deserves.”

Taking part in the walkabout was loyalist community leader Jackie McDonald and Lisburn Road Business Association head Peter Carrington. The group met with local traders to discuss their views on a proposed facelift and to hear how they were coping with the recession.

“The message we heard loud and clear was that Finaghy is a fantastic area but traders are under pressure and a significant investment in creating a village hub would make a difference,” said Cllr ó Muilleoir.

He added that a bid for funding for a public realm project will be made to the Council’s South Belfast Local Investment Fund and he has now written to DSD Minister Nelson McCausland seeking matching funding.

Jackie McDonald says he hopes a facelift will encourage new business into the Finaghy area and provide a boost to struggling shops.

“The crossroads is undoubtedly overdue a makeover and it’s good to see that Máirtín has it on his radar,” he said. “The area serves two communities that have shopped there for years and it needs brightened up.   Hopefully a makeover will encourage people to start businesses in the empty shops.”