Whirlwind winding up of Stormont

Whirlwind winding up of Stormont

January 29, 2017 Máirtín Ó Muilleoir Blog 0 Comments
It was a climactic finale to the Assembly mandate at Stormont this week as I announced the setting up of a public enquiry into the RHI scandal.
If a Finance Minister has any job, it is to defend the public purse. That’s why I was pleased to lay out the terms of the no-hiding-place inquiry to the Assembly on Tuesday.
In doing so, I was serving a community outraged at the loss of £85,000 every day to the Renewable Heat Incentive debacle.
Bad enough that the former First Minister should have been the architect of what she herself acknowledges is a £500m mess, but the hapless actions of her successors who failed to take speedy steps to stop the financial hemorrhaging only added insult to injury.
All these matters and more will now be investigated by retired judge Sir Patrick Coghlin who I have appointed to carry out the public inquiry.
The conduct and operation of the inquiry will be a matter for Sir Patrick Coghlin but I am confident he will get to the truth.
For my part, I told the Assembly on Tuesday what I believe the public wants from a public inquiry:
An inquiry which in, public session (hopefully broadcast live), asks the hard questions: “What did you know and when did you know it?”
An inquiry which follows the money.
An inquiry which will hold to account those responsible for wrongdoing no matter how high or low a position in society they hold.
An inquiry which has consequences for those who have failed the public in the most shameful fashion.You can see my address to the Assembly here and the statement setting up the inquiry here.Monday in Stormont was also a pivotal day. MLAs were presented with an eleventh-hour proposal to end losses from the RHI scheme for just one year. A flawed proposal which is far from the zero-cost, comprehensive plan to save the taxpayer £490m over 19 years, the plan was, however, the only one brought forward to stem next year’s losses. As such, Sinn Féin abstained from the vote for the plan but allowed it go through. The plan’s faultlines are there for all to see in its dependence on State Aid permission from Europe before it can take effect. And then there are questions about how quickly a new promised regime of robust inspections of all those using the controversial boilers will start. I will continue to monitor both these issues between now and election day, 2 March, when I step down as Finance Minister.
But what a pity the Department for the Economy didn’t come forward with a plan to fix RHI when I first flagged up its failings to them n June 2016 immdiately after my appointment as Finance Minister!

Of course, life isn’t just about politics. As my old pal Fr Des Wilson told me some time back, friendship is much too important a thing to be disrupted by politics. So it’s with much appreciation for his service as an MLA and maximum respect for his 30 years-plus of community building, that I wish DUP East Belfast standard bearer Sammy Douglas a happy life post-Stormont. Sammy made his swan song speech to the Assembly on Tuesday and now sets out on a new path which no doubt will be filled with activism and bridge-building — as well as more family time with his beloved grandchildren. I know readers of this blog will wish him well.

But that said, I did enjoy meeting so many committed champions of change at my local action launch for the Balmoral area on Thursday night. And what a pleasure it was to recycle, at this time of global tensions, the theme of the State of the State speech earlier the same week by Governor Jerry Brown of California — No Turning Back, Not Now, Not Ever! 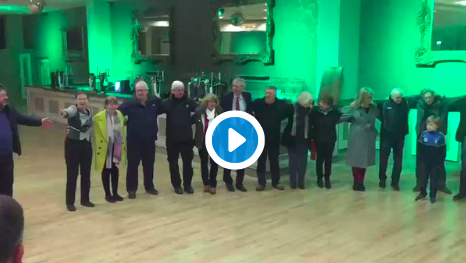 Inspired by @JerryBrownGov I had my own ‘no turning back’ huddle at @sinnfeinireland local election meet. “Not now, not ever.” #ChunTosaigh. You can see it here.