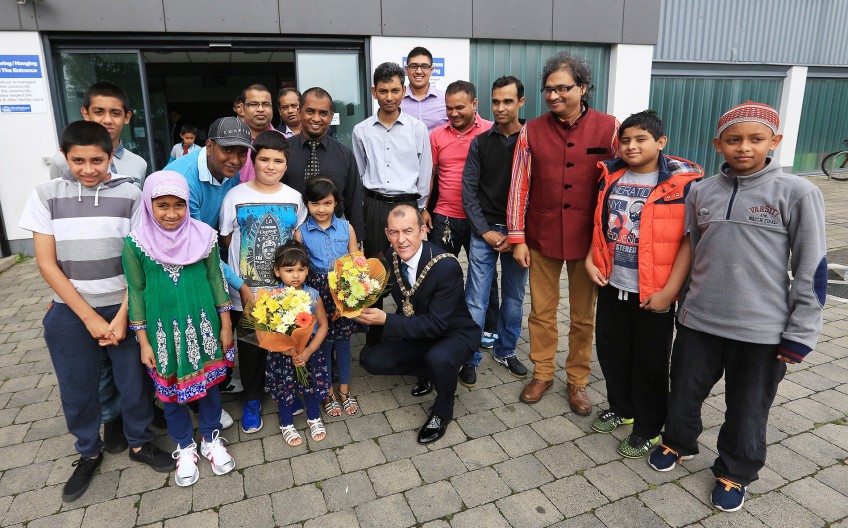 August 23, 2015 Máirtín Ó Muilleoir Blog 0 Comments
The path to peace is well-signposted and despite attempts to divert our spirited caravan, I’m confident that there will be no stopping us now.
Threats, therefore, to throw Sinn Féin out of the political process  in the wake of recent murders on our streets should be seen as nothing more than a sideshow.
We should all stay focused on the task at hand — politicians should build prosperous communities, the police should bring criminals to justice. And both, of course, should work positively together.
After a whirlwind visit of five great cities in the US, I am reminded again of how well-worn is the path to success followed by waves of emigrants ‘hurt’ out of Ireland.
A key part of their progress was establishing Irish centres which enabled them to pool their resources, celebrate their culture and build support networks.
And while Irish centres come in all shapes and sizes across the US, I doubt if any is as impressive as the Irish American Heritage Center of Chicago.

I had the good fortune to meet former Center President and co-founder Tom Looney at the 90,000 sq ft complex on Monday past in Chicago’s northside. Tom arrived in Chicago in 1960 at the age of 20 just after JFK had been elected President — “a great time to be Irish in America,” he says.

He has seen it all: founder of the first cable network in the Chicago area, he ran his own TV show for six years and his Abbey pub is a Windy City institution.
He’s rightly proud of the multi-use centre which boasts a 300-seat reception hall, a theatre, an impressive library with one of the largest collections of books on Ireland in North America, an archive room, a museum and, famously, The Fifth Province bar – which takes its name from Mary McAleese’s contention that the Irish abroad make up our fifth province. A crumbling building when purchased for $502,000 in 1985 (Tom suspected — correctly — a rival bidder would submit a half-million dollar closed bid and suggested the Irish put a little cherry atop their bid!), the Irish American Heritage Center today is as well-appointed and sparkling as any Magnificent Mile hotel. “It was a labour of love,” says Tom. “All the trades pitched in to carry out the renovations and create a centre which would be a testament to the Irish of Chicago.”
I was reminded of that ambition and resolve when I joined the Bangladeshi community of Belfast earlier today to welcome the Lord Mayor of Belfast Arder Carson to a community reception in the Shaftesbury Community Centre. The Bangladeshis of Belfast are famed for their cuisine — the majority of our Indian restaurants are run by Bangladeshis — and as their community grows, they want to establish a community centre to serve as a gathering place for meetings and a hub of cultural celebration. Their journey mirrors that of Irish America and I have no doubt that as the Irish enriched the US, the Bangladeshis — now in their third generation in Belfast — will greatly enrich the city of Belfast. Go n-éirí an bóthar leo.