The True Spirit of Belfast in a Kuwaiti home 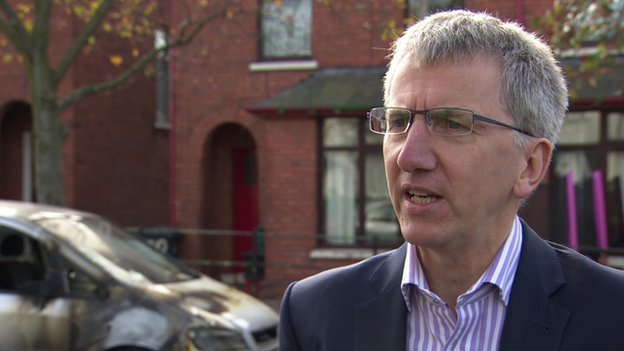 The True Spirit of Belfast in a Kuwaiti home

Our lensman pal Dónal McCann opened his compelling exhibition on my mayoral year at the Golden Thread Gallery on Thursday night as part of the Belfast Festival at Queen’s.

Dónal took 10,000 pictures on the trail with me but reduced that number to around 600 for his website, to 65 for the exhibition catalogue and to just 24 for the gallery walls.

You can see the final two dozen yourself at the Golden Thread Gallery throughout this month but consider yourself invited to the launch of the catalogue — which has a preface by veteran Belfast journo Deric Henderson — on Saturday 18 October.

That doyen of Belfast journalism Ivan Little penned words to accompany a selection of Dónal’s photos for a special Belfast Telegraph spread.

Dónal, a West Belfast man, is a master-photographer and his pictures speak to the true spirit of Belfast.
That spirit can be found among old-timers in Belfast and among our newest citizens. Certainly I found it in abundance in the home of Ahmed Ali when I visited him yesterday after his home and that of his neighbour were targeted in an overnight racist attack. As their families played outside their homes, Mr Ali told me he cared much more for the damage caused to the image of Belfast than to the damage caused to his car which had been torched by the attacker. “I love Belfast,” he said. Mr Ali has been in Belfast for some time and hails from Kuwait. I have a sister in Kuwait who is welcomed into that city and treated with respect. How outraged would we be if Belfast citizens abroad were to have their windows smashed because they were of a different colour to their neighbours or worshiped a different god?

While we wait for police action to bring the perpetrator to book, community, political and faith leaders need to show practical solidarity with these families.

Later tonight, I will visit the celebration of Eid in the Belfast Islamic Cultural Centre. On Friday and Saturday, our small Jewish community observed Yom Kippur. That’s how the great city of Belfast should work: with respect for all faiths and a welcome for all nationalities.

On Wednesday and Thursday, our sister city of Boston will host the annual Golden Bridges extravaganza which enables the counties of Derry, Donegal and the city of Belfast to set out their stall in the capital of Massachusettss. All eyes will be on plans for a ‘Belpot’ — a tournament of Boston colleges in Belfast — but we’ll also be spotlighting the business success stories across the region and asking how we can build new productive alliances in a new era. There’s still time to register — just — and with Congressman Richie Neal, Senator Linda Dorcena Forry, Mayor Marty Walsh and Maureen Bennett of Squire Patton Boggs among our welcoming party and Mayor Campell of Donegal and Mayor Stephenson of Derry are leading the charge for Donegal and Derry. Once again, the Seaport Hotel will be the venue and I will see you there on Wednesday evening when acclaimed poet Fred Marchant will get us off to a start in verse.