The New Yorkers are coming 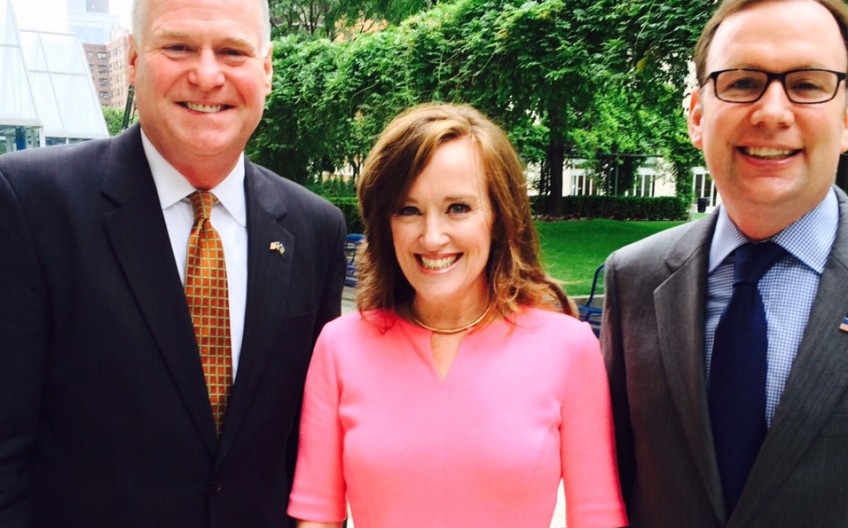 The New Yorkers are coming

June 7, 2015 Máirtín Ó Muilleoir Blog 0 Comments
There were many highlights at the sixth annual New York-New Belfast conference which ran from Wednesday to Friday. Here’s my top ten:
1. Anthony Toner of EastSide Arts regaling the opening night full-house with this soulful reflection on gentrification, Sailortown.
2. Famed urbanist Michael Sorkin (and author of ‘Twenty Minutes in Manhattan’) telling the Fifth Avenue launch of Vicky Cosstick’s groundbreaking book Belfast: Toward a City Without Walls that while the ‘peace walls’ may have become “invisible” to those who live in their shadow that doesn’t mean that they are any less an indictment of our society.
3. Congresswoman Kathleen Rice opening the conference with a appeal for more across-the-aisle co-operation in politics for the common good (she was talking about the US but you get the picture!).
4. Independent Unionist John McCallister MLA lamenting the fact that unionists still don’t fully get Irish America — nor Irish America fully get unionism.
5. Tenor David O’Leary hushing the finale reception in the 52nd floor residence of the Consul General of Ireland Barbara Jones with his moving rendition of Carrickfergus as the Empire State Building turned green. (I swear, I had a hand in that!)
6. Ryan O’Leary of WhiteHat Security in California — who flew in for the conference — singing the praises of the company’s talented Belfast workforce.
7. Daniel Dromm, New York City Council Member and Chair of the city’s Education Board — budget $28bn — saying he had never been more proud to be Irish than when he heard the result of the Irish referendum on marriage equality.
8. David Blackmore of The Glenmoreangie Company — home of some of Scotland’s most-loved whisky brands — declare that Peter Lavery’s craft whiskey distillery in the former Crumlin Road Jail had the potential to be a world-beater.
9. Artist Mac Premo’s stunning video on changing the world, one skateboard at a time. (We gotta get him back to Belfast!)
10. Doug Steiner, founder of Steiner Studios, the biggest US film studio outside of Hollywood, give the thumbs-up to the stirring NI Screen showreel which prefaced our discussion on Belfast as a global hub of movie-making.
My thanks to all who made this unique collaboration possible and of course this week was simply the prologue for the Belfast Homecoming on 7-10 October when we get to repay that gracious New York hospitality on our home soil.
Back home, I see my favourite coffee shop has now gone online with its Kaffe-O store, representing the type of fun entrepreneurial drive we saw in New York during the visit to the WeWork creative work space. Congrats to them.
And keep Wednesday 1 July free and your chequebook ready as we now have our four arts groups and their first sponsors lined up as we bid to raise £20k to celebrate what Geraldine Hughes told us in New York was Belfast’s biggest asset: art.
Go dté sibh slán.