Steady hand to the fore

Steady hand to the fore

On the basis that every day’s a school day, I was looking forward to my first visit to Sullivan Upper School on Thursday past to meet the students of the Politics Society.
Uniquely, Sullivan, a state school, boasts an Irish motto: ‘Lámh fhoistineach in uachtar’ which translates as gentle or steady hand foremost. (Its most famous former pupil is one Rory McIlroy, steady hand indeed!)
What did I learn? That many of our young people are not clinging to the old script.
I had thought my youthful audience would share the unionist determination to exit the European Union no matter what the political, cultural and economic cost.
In fact, when I asked how many of those present would have voted to leave in the Brexit referendum of 2016 — if they had been of age, and most still aren’t old enough to vote — not one hand went up.
All of which underlines the importance of the Irish Government and the EU 27 maintaining a steady hand on the tiller in negotiations with the British on the terms of the divorce from Europe. A big step forward was taken this week when the British Prime Minister agreed to place the plans for the backstop which would ensure special status for the North as relates to the Customs Union and Single Market into the draft agreement.
Of course, the British, under pressure from their DUP partners, could still renege on this commitment. However,  increasingly the majority in the North which voted to remain can dare to hope that, rather than be dragged out off Europe and shunted into a Brexit backwater, the Six Counties may yet enjoy the best of both worlds: unhindered access to the EU marketplace and to the British market. Now that is a special proposition which would attract additional investment to the beleaguered Northern economy.

Much of our discussion in Sullivan focused on the past and how best we might heal the wounds of conflict. Undoubtedly, truth recovery is central to such a process. Indeed, on Saturday, to mark the UN International Day for the Right to Truth, relatives of victims of loyalist gangs, which were working in collusion with the British state forces, gathered to give witness to their unwavering demand for the truth.
Earlier today I attended the 25th anniversary commemoration for 17-year-old Damien Walsh. 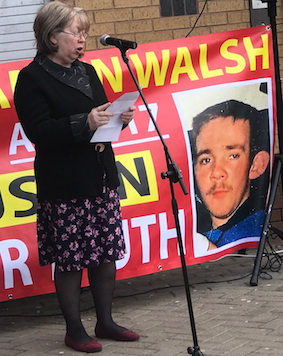 The teenager was shot dead by a UDA gang, which had been fed intelligence information by state forces and equipped with weapons brought into the North by a British agent. The fatal attack took place while a British Army undercover unit looked on. At the commemoration, I was struck by the grace and dignity of Damien’s mum Marian (right). She told the gathering that Damien’s killers were trained, ordered, armed and protected by the British state. Those are views endorsed, in relation to the UDA, by two distinguished British investigators: John Stevens and Sir Desmond de Silva. Stevens interviewed 210 loyalists under caution. 207, he later stated, were state agents. (You can download a new report by Relatives for Justice into Damien’s shooting here.)
With the honorable exception of the Belfast Media Group, the media were not on hand to hear Marian Walsh’s speech today.
If they had have been they would have seen her restful; composed, steady, deliberate and solemn hand to the fore and been under no doubt but that the truth about collusion will out.