Off to the Palace 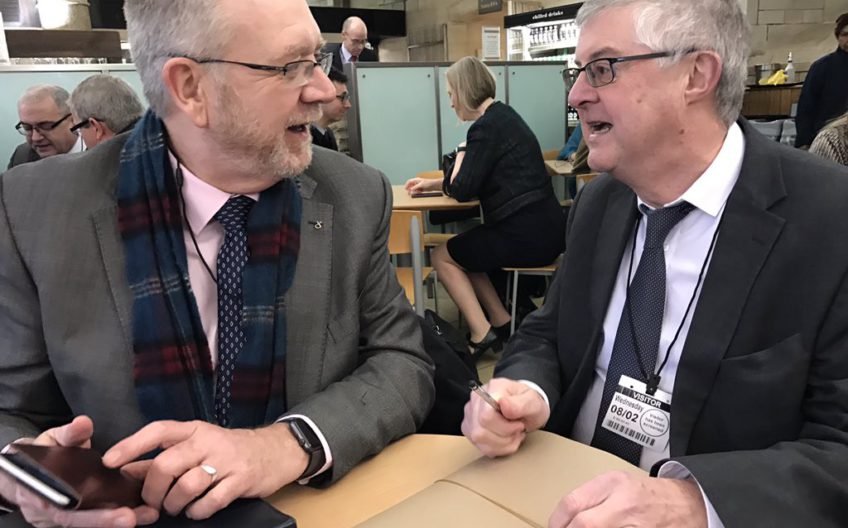 Off to the Palace

In the Palace of Westminster on Wednesday, I represented the Executive at the latest meeting between the Tory Government and the governments of Scotland, Wales and the North of Ireland.
I don’t spend a lot of time in palaces — and more’s the pity. For while poorhouses and penitentiaries feature more prominently in the past of the mere Irish, there’s a Monty Pythonesque edge to the Palace Proceedings. A sort of Faulty Towers meets Julius Caesar.
Proceedings were chaired by James Brokenshire, he who believes that the British Government really can hope for a better past — internment camps, Hooded Men, collusion, Pat Finucane, Glenanne Gang, Brian Nelson and Julie Livingstone notwithstanding.
And making cameo appearances were Brexit Minister David Davis and Remain-voting Chancellor of the Exchequer Philip Hammond. Minister Davis told us his negotiations will result in “all we have already (in the EU) and more”. Where Brexit meets Barking!
Chancellor Hammond meanwhile regaled us with a fairytale of how financial services would emerge stronger after Brexit; how other countries would be too gentlemanly to poach financial companies from the beleaguered City and how An Taoiseach agrees with the Tory tactics. I will give the Chancellor this though: I thought austerity was his most counterproductive policy; that was before Brexit.
The Chancellor’s delusion was shared by the Secretaries of State for Wales and Scotland who were eagerly earning brownie points by heaping scorn on the representatives of the democratically-elected Welsh and Scottish Parliaments: Cymru Finance Minister Mark Drakeford and Alba’s Brexit Minister Mike Russell.
Mark is a Welsh speaker, Mike a revered proponent of his native Gaidhlig. We might all have been speaking our native languages to the palace guards such was the disregard for our respective positions.
Still, as the Brexit runaway train gathers speed, it’s not too late for the 56 per cent here who voted to Remain to press their case for Special Status within the EU post-Brexit. The alternative is too awful to contemplate: a lost decade of stagnation, retreat into anti-immigrant and anti-refugee rhetoric, building walls instead of bridges, the collapse of our EU-funded farming sector, and an end to peace funding.
On the flight home, I read in the Financial Times, hardly the Morning Star, that Brexit will result in a loss of one quarter of all trade in goods and services from the ‘UK’.
Perhaps in the puzzle palace they have a solution to that conundrum. If so, I didn’t hear it from Mrs May’s “red, white and blue Brexit” brigade.

You can see my Storify summary from my expedition to the Palace here.