This will come as a surprise to anyone I have had over for dinner in the past but I actually spent two glorious summers prepping food and cooking in a busy restaurant in the sun-blessed seaside resort of Wildwood, New Jersey.

I was 40 years younger and a bit more nimble and able to work hard and play hard with a long day at Urie’s Fish Fry Restaurant followed by a long night at the Martinique and then a big diner breakfast. I was no Antony Bourdain but I prepared stuffed lobster (they came in fresh, we killed them with a butcher’s knife through the skull and then brought the blade down almost to the chopping board to open up and clean the tail) and was a dab hand at oysters Rockefeller.

Admittedly, I never developed the heat-impervious hands of great chefs and kept dropping the hot plates. I was admonished frequently: “Marty, in this country, we serve our food on the plates and not on the floor.”

My other memory of summers of ’78 and ’79 is that the intense local staff — not a few of them on speed to cope with the furious pace of a restaurant doing 1200 covers a night — dubbed me ‘The Immigrant’. Even though, I was probably the only person in the entire workforce of Italian and Irish hertiage who wasn’t of immigrant stock.

I mention all this as prologue to my favourite event of the year: the West Belfast Masterchef in the Seasons Restaurant, Balmoral Hotel, this Thursday 3 August. I will be there cheering on my buddy Nisha Tandon who is taking on that gastronomical giant of Sinn Féin: West Belfast MP Paul Maskey. I would much rather be right in the centre of the kitchen storm but my courage failed me when I saw the entry form in the Andersonstown News. My fear: that despite all that experience of four decades ago, I would be an utter shambles when the stakes were down. So I decided to sit this one out. I have a colleague who wishes he had done that as well: Sinn Féin’s top man John O’Dowd MLA who did indeed compete in the heats but got the thumbs-down from the judges. Could happen to anyone, says you. But John’s a trained chef! Bon appetit. 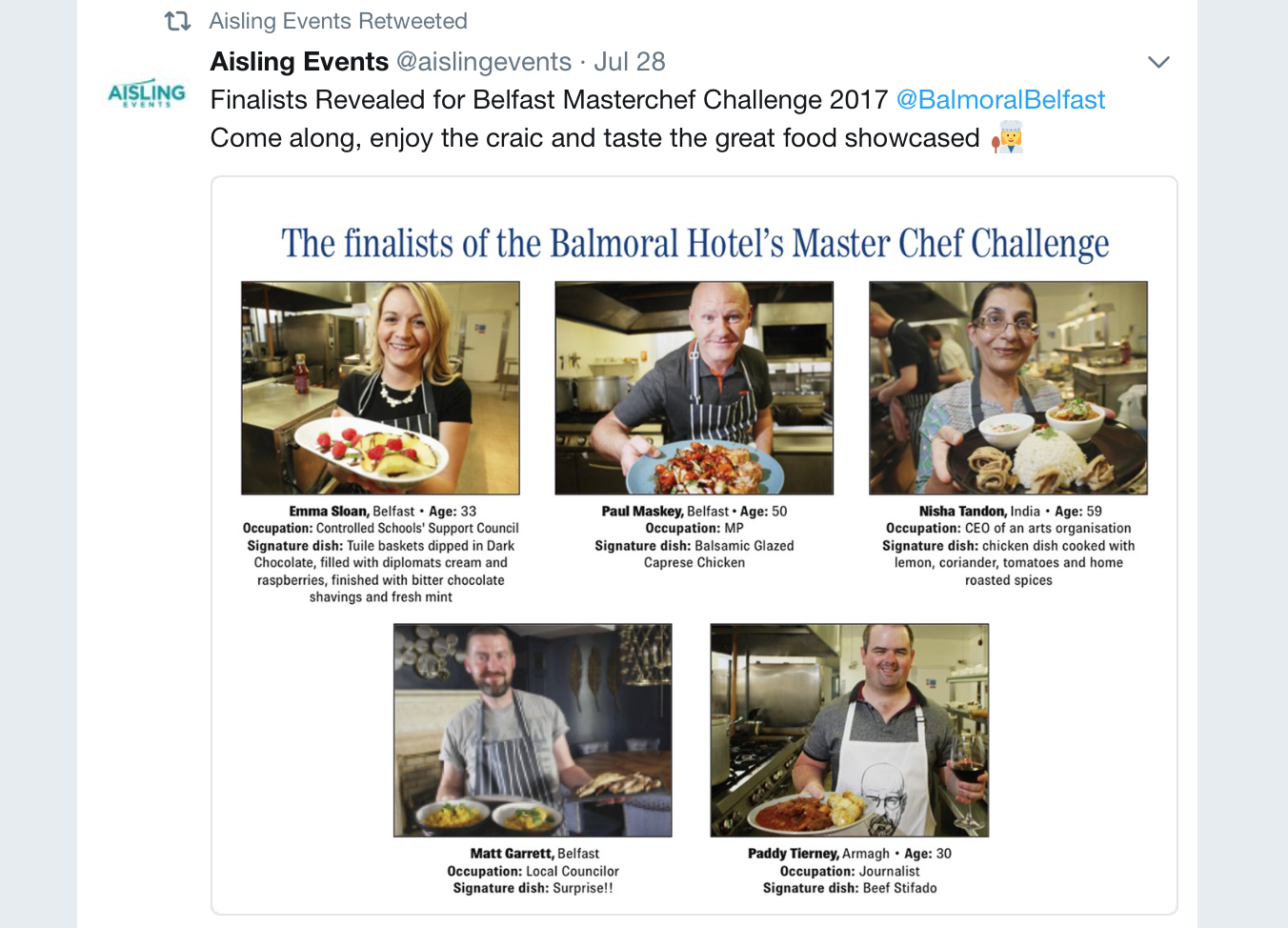 I will be in the English Midlands on Monday to meet meeting business people interested in investing in Belfast. As English companies prepare to deal with the disruption of Brexit, many are looking at how best to continue to access the EU market. If the North had Special Status with tariff-free access to both the EU and British market post-Brexit, it would present a compelling proposition to English businesses.

Business understands that you can’t leave the Single Market and the Customs Union and have a frictionless border. They also understand that trade tariffs, more complex supply chains and compliance with two customs systems will increase costs and lessen competitiveness — which ultimately means fewer jobs and less investment.
In my discussions in England, I will be laying out the possibility of a different vision with goods manufactured in the North having free access to EU and British market. I believe that could be a boon in particular to our manufacturing sector and enable us to continue to say to North American companies that the North is a gateway to the EU. Wish me luck.
Finally, congratulations to John Samuelsen, mass transit union leader in New York, who has been named at the Irish Echo honoree at the annual Irish Labor Awards on 8 September. Over the past year, the labor unions of America have pledged more funding to West Belfast community enterprises than the biggest US Irish philanthropic funds have pledged in the past decade. I was delighted to hear from Harry Connolly, champion of the planned James Connolly visitor centre on the Falls Road that the first cheques have arrived on back of American trade union movement backing for the project. It’s an great partnership and one we will salute at the Irish Echo Irish Labor Awards…and then replicate.