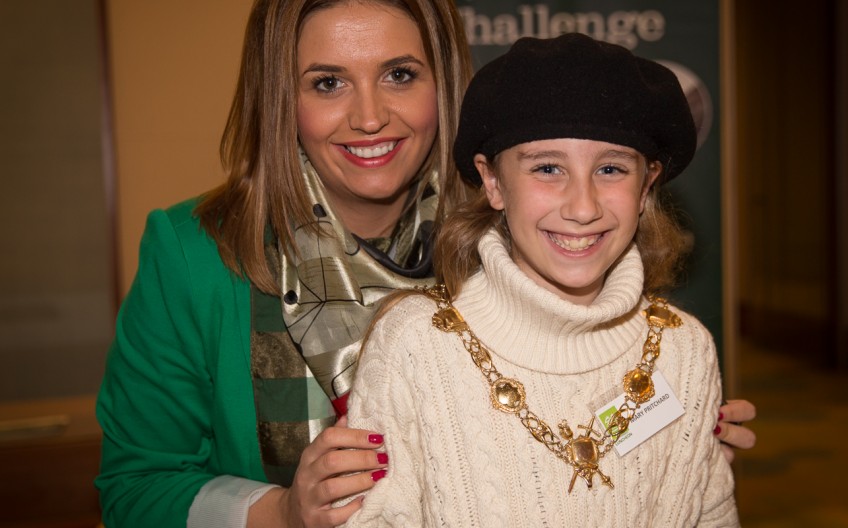 October 27, 2015 Máirtín Ó Muilleoir Blog, News 0 Comments
Highlight of the seventh annual Golden Bridges conference last week in Boston was the presentation of special awards to two American companies — OneSource Virtual and Metaverse Mod Squad — which have recently located global offices in Derry.
Golden Bridges is the largest gathering in Boston between the Irish American community of Massachusetts and leaders of northwest Ireland with the aim of building transatlantic bridges of culture, commerce and community.
OneSource Virtual co-founders Britt Wirt and and Wesley Bryan flew in from their Dallas headquarters to pick up the Investment of the Year Award at a gala luncheon during the Golden Bridges conference in the Seaport Hotel and World Trade Center. Picking up a special award from Derry and Strabane Mayor Elisha McCallion, Wesley Bryan said he was convinced Derry was the right location for the company’s European headquarters as soon as he saw the city. He praised the OneSource Virtual talented workforce in Derry — set to grow over coming months — and paid tribute to Invest NI for helping with the establishment of their new Derry offices which provide HR outsourcing services virtually.

Amy Pritchard of Metaverse Mod Squad, recipient of the Business Bridge-Builder of the Year Award, said the move to Derry had been the right decision for her San Francisco-headquartered company. Metaverse Mod Squad’s digital engagement teams chat with customers, moderate web content, manage communities and buzz in social media for some of the world’s top brands. Accompanying Amy Pritchard to the presentation was her daughter Mary who was made “mini-mayor” for the day by Mayor Elisha McCallion of Derry.

Lauding both OSV and Metaverse, Mayor McCallion said their investments were “hugely significant” for the city. “I am delighted to be taking part in this years Golden Bridges conference as part of the Northwest Ireland delegation,” she said. “The conference is a great platform to promote the City and region’s investment proposition to a range of key companies, organisations and entrepreneurs.”
Those words were echoed by Donegal Mayor Ciarán Brogan: “Donegal County Council is delighted to continue in its partnership with the Irish Echo and Derry City Council in the context of Golden Bridges,”he said. “We  are networking at Golden Bridges with business, education providers and the political establishment to identify areas of mutual interest and benefit.”
Business Partners in the conference were led by Liberty Mutual, Invest NI and Tourism Ireland as well as the Donegal and Derry and Strabane councils. The 2016 Golden Bridges Conference is earmarked for Boston on September 8-9.