For Nathan and Brendan For Nathan and Brendan

December 7, 2014 Máirtín Ó Muilleoir Blog 0 Comments
An Irish Language Act for the North would deliver on the promise of the Good Friday Agreement of 1998 and the St Andrews Agreement of 2007 — both important pillars in our peace architecture.
Alone in these islands, speakers of the indigenous language in the North of Ireland, do not enjoy the protection of a language act. The British Government has long-since reneged on its commitment to facilitate such an act and many in unionism have, sadly, set their face against any recognition of An Ghaeilge, largely as part of their opposition to Sinn Féin.
That’s a pity because the Irish language has no politics and no religion and while a language act will mostly impact on how government bodies treat Irish speakers, it’s really about people.
People like Nathan and Brendan, twins I met with beaming mum Emma this week. The boys were educated in Scoil na Fuiseoige, an Irish language primary school in Twinbrook on the outskirts of west Belfast. They have recently been elevated to big school and now attend the Irish medium secondary school Coláiste Feirste. They more than held their own with me as we shot the breeze, their proud mum looking on, pleased as punch. An Irish Language Act is the same as saying to Nathan and Brendan that society respects them and their chosen language; that they will not face discrimination either as children or as adults because they speak a language which has been spoken in these parts for over 2,200 years.
In short, they would enjoy the same rights as Welsh speakers in Wales, Gaelic speakers in Scotland and Irish speakers south of the border.
First Minster Peter Robinson said last week:

“It is a perfectly honourable entitlement for anyone to advance the Irish language and speak it. Of course, we respect those who do. I am fully supportive of those who enjoy speaking the Irish language, its richness and the culture surrounding it. They must be protected.”

It’s my hope that the First Minister will act on those words at the Talks and show the generosity and imagination society is calling out for by agreeing to an Irish Language Act.
Whatever about the world of politics, I can affirm that change is in the air across Belfast thanks to the community and voluntary groups who are doing so much to build up our community. We will gather in City Hall, courtesy of our great lord mayor Nichola Mallon, on Wednesday night, to raise funds for four outstanding charitable groups who will ‘pitch’ to business leaders at the second annual Funding Network event. Among those pitching will be the inspirational NOW project which works with adults with learning disabilities and a new homework club for the children of refugees and asylum-seekers. I will be sponsoring the gay arts festival Outburst which, operating on a shoe-string, is celebrating difference. You can make a contribution at the Funding Network Just Giving page. Míle buíochas. 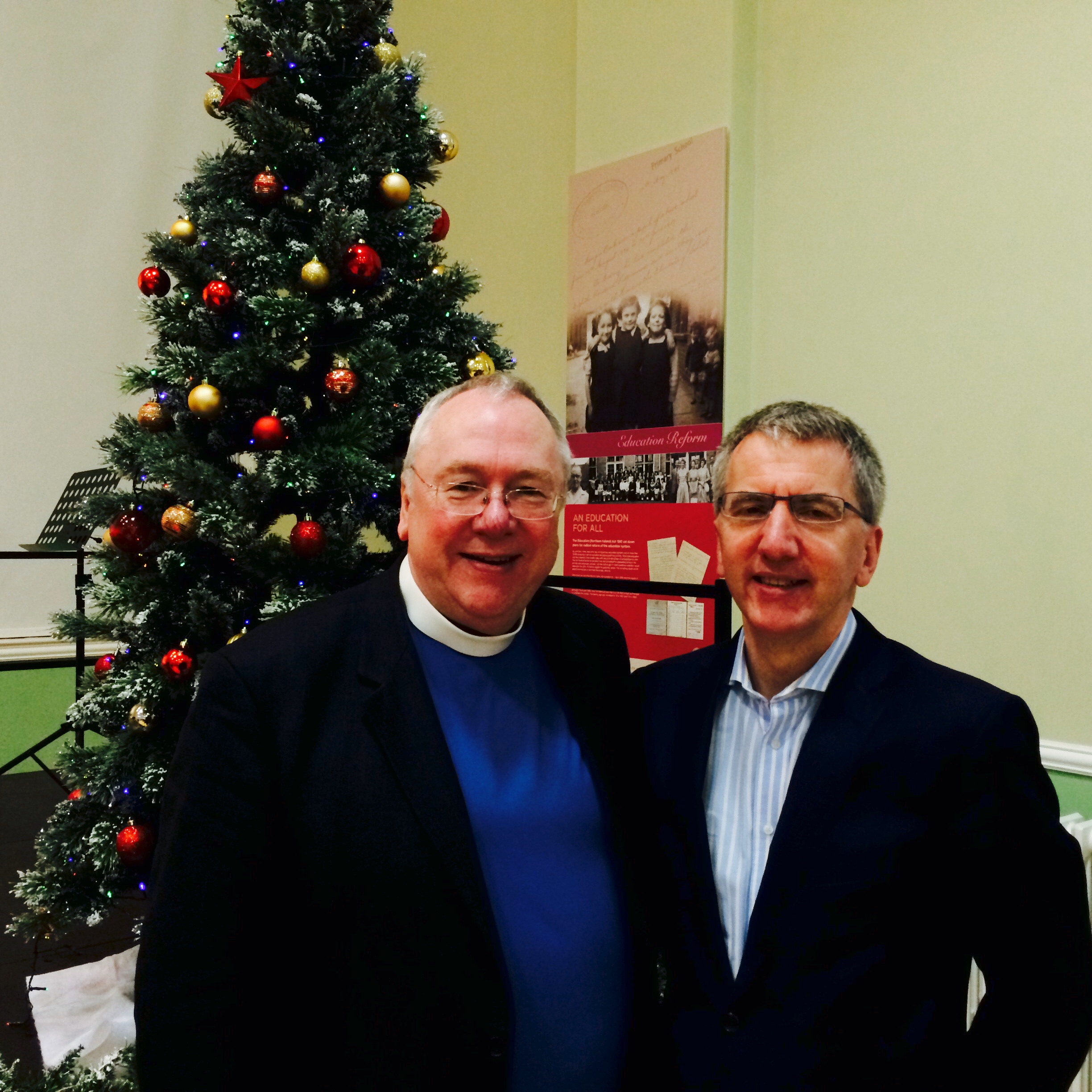 Meanwhile, I continued my advent journey across Belfast’s Protestant churches by attending a moving service today in Templemore School off the Newtownards Road in East Belfast. Templemore is a first-class community project based in a reborn school which is playing host to the congregation of Westbourne Presbyterian Community Church while work is carried out on their nearby, 134-year-old church premises, affectionately known as the Shipyard Church. I had been on a longstanding invitation from the Rev Mervyn Gibson (right) to attend a service at Westbourne and enjoyed hearing him preach on the role of Mary in Christian theology. He also prayed for the success of the Talks and recounted how ministers from across south and east Belfast had gathered this week and prayed, by name, for every MLA in those areas. Something, this south Belfast MLA appreciates deeply. They also cheered me with that carol classic In the Bleak Mid-Winter which contains some timely advice for all of us who aren’t involved in the talks but wish for a successful outcome:
“If I were a Wise man, I would do my part;
Yet what can I give him; give my heart.”