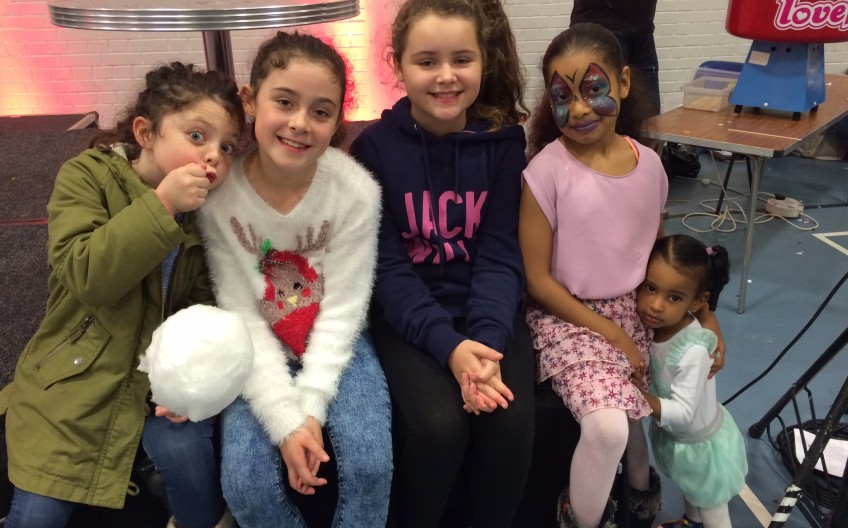 December 6, 2015 Máirtín Ó Muilleoir Blog 0 Comments
I popped into the last minutes of the ‘Winterfest’ at the marvellous LORAG centre in South Belfast on Saturday where hundreds of children and their parents were enjoying a Christmas party with a decidedly international and inclusive feel.

The Big Man himself, complete with sleigh sans reindeer, had made the journey complete with gifts for all his young friends — regardless of whether or not Christmas is part of their religious calendar.

Many of our new communities had set up stalls to show off their craft and handiwork — a special word of praise for the Roma ladies creating paper floral displays — against a background of Irish traditional music.
I was taken by how easily the children mixed regardless of colour, ethnicity, religion — or any of the other differences which give adults cause for pause. Indeed, as I snapped some pictures for Twitter, those with names like Cadhla, Chloe and Caitríona were helping me with the spelling of what were for me more unusual names like Aya and Hassan.
Where I saw difference, they saw only friendship.
There’s a lesson for us all there as we prepare to welcome ten persecuted Syrian families to Belfast this coming weekend. Let’s ensure they get a real Belfast céad míle fáilte which will, in the very mouth of Christmas, speak of peace and love rather than of war and hate. Those who use the actions of the barbarians of ISIS to foment hostility towards this first group of Syrian refugees received a stern rebuttal from both First Minister Peter Robinson and deputy First Minister Martin McGuinness. That’s exactly the type of Fresh Start our children deserve.
The Assembly’s Finance Committee investigation into the NAMA-Cerberus scandal was back in the headlines this week as former Finance Minister Sammy Wilson arrived to give his version into the events which are being investigated by the FBI, PSNI and British NCA — and our humble committee. There were some robust exchanges which you can see above.
Finally, at a constituency coffee morning in the Ivanhoe Hotel, Carryduff, yesterday, I got to meet the inspirational Geraldine Wilkins who is behind the Fighting Words project — founded by Roddy Doyle — which uses the power of literature to unlock the full potential of our children. The initiative is based in that East Belfast cathedral of community, Skainos, and is a flagship project of the American Ireland Funds. Those generous partners have helped Fighting Words get on its feet in Belfast but ensuring it thrives in the time ahead is a project I hope to return to in 2016.