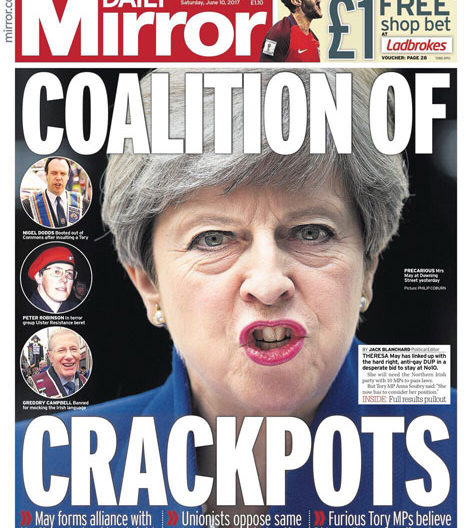 EDUCATION (ABOVE): How the Daily Mirror in England announced the Tory-DUP deal to its readers

The man who made time made plenty of it, a wag or wise man (not completely sure which) told me this week.

He was responding to my suggestion that the car crash coalition being put together by the Tories and DUP would try to slow the pace of positive change in the North of Ireland.

His point: this deal of the truly desperate will be but transitory.

And it will surely have some surprising side effects.

Who would have guessed that by grabbing onto the DUP lifeboat, the Tories would have sparked a surge of interest among the bewildered British people in the weird and wonderful pronouncements of the DUP? 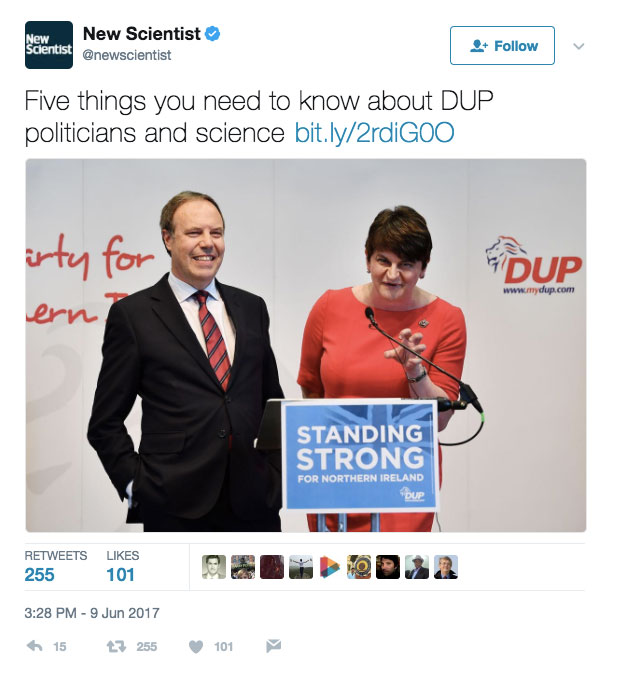 Even the New Scientist, with its 2.5m Twitter followers, has got in the act with its Five Things You Need to Know about the creationists and climate-deniers of unionism’s vanguard. That old joke about passengers on flights into Belfast being told to set their watches back 400 years doesn’t seem so funny to British voters now that their government’s future depends on the extremists of the DUP.

With no detail of the dream deal yet to hand the only thing we can be sure of is that this marriage will end in tears.

Until then, let’s use the time ahead to continue to fight for Special Status for the North in the EU to mitigate the Brexit disaster and vow to continue to make progress on the vital rights agenda.

The choice is clear: we can allow this coalition to turn the clock back on all the gains made since the Good Friday Agreement.

Or we can call time on back-of-the-bus politicians.

A thousand thanks to all those who supported my election bid in South Belfast this week. While we didn’t reach the mountain top, I managed to increase my vote from the 2015 Westminster election by over 1700 votes — a commendable result and source of much pride to my unstoppable election team. There will be another day for Sinn Féin in South Belfast but for now it suffices for me to congratulate my colleagues in Sinn Féin across the North who scored our best-ever result (238,000-plus votes and seven seats). Comhghairdeas on a monumental election outcome.