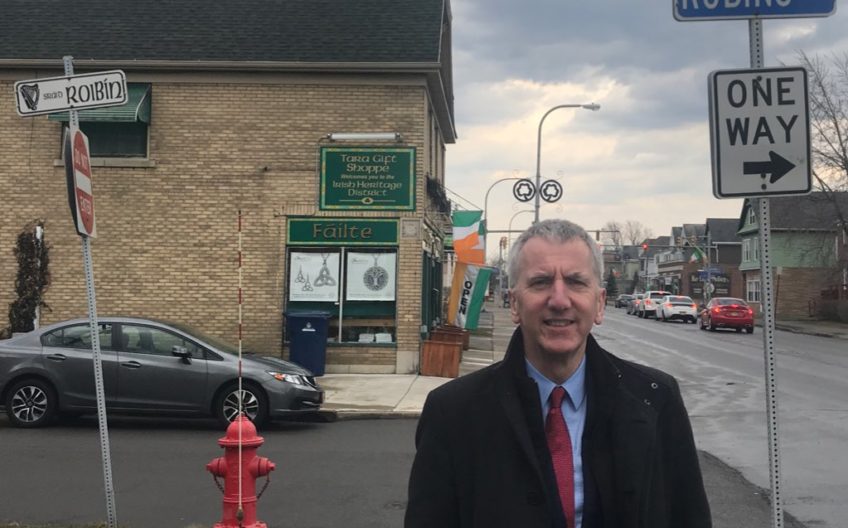 It’s known as the City of Good Neighbours and was recently voted America’s Friendliest City so you can always expect a hearty céad míle fáilte in Buffalo, New York — especially if you’re a wandering Irishman.
For the harsh winters – the end of the year closed with the lowest ever temperatures since records began 146 years ago — stand in stark contrast to the warm welcome I received during a 24-hour whirlwind visit to the border city.
I was overwhelmed with the generosity and graciousness of my welcome but if cynics think that means I am going to declare Buffalo the new Capital of Irish America they would be mistaken. (After all, I have already given that title at various times to Boston, Chicago and Philadelphia!) Suffice to say however, that the University of Buffalo does hold the largest and most important collection of James Joyce materials in the world — which I had the pleasure of seeing.
And if James Joyce is the greatest author writing in the English language in the 20th century and if Ulysses is the greatest novel written in the 20th century then surely the city in which the greatest collection of Joycean materials resides is the undisputed centre of the Irish universe!
In a hectic day, I got to see the rallying site of the Fenian invasion of Canada, meet the Buffalo Fenians GAC who have ambitious plans for a new Gaelic Park, meet Conor Hawkins, Belfast expat turned general manager of the city’s glitziest hotel theCurtiss, and be honoured at a remarkable community reception which was capped by a barnstorming performance by the Rince na Tiarna school of dance.
My host was the dynamic state senator for Buffalo Tim Kennedy who also escorted me to a series of business meetings, many linked to the visit by the University of Buffalo basketball team to Belfast for the US colleges hoops Classic in late November. I had the distinct privilege of conveying an invite to the revered Buffalo Sabres ice hockey team to visit Belfast in 2020 to mark the 20th anniversary of the Belfast Giants debut and got to build bridges to the start-up companies in the city’s remarkable 43North incubator.
If Thursday was Buffalo, Friday was Newark, New Jersey, where I was delighted to address the Rutgers University Division of Global Affairs annual conference. You can read my edited comments here. And on Saturday, it was back to Belfast to kick off the remarkable exercise in building community which is the Andersonstown News’Best of the West.
An amazing 530,000 votes were cast in the race to identify the Best of the West in a dizzying variety of categories including Best Dinner Lady and Best Caretaker! Is fann guala gan bráthar, goes the Irish saying. It’s a weak shoulder without a brother. But in both Buffalo and Belfast, I can attest to the fact that you will always have a shoulder to lean on.