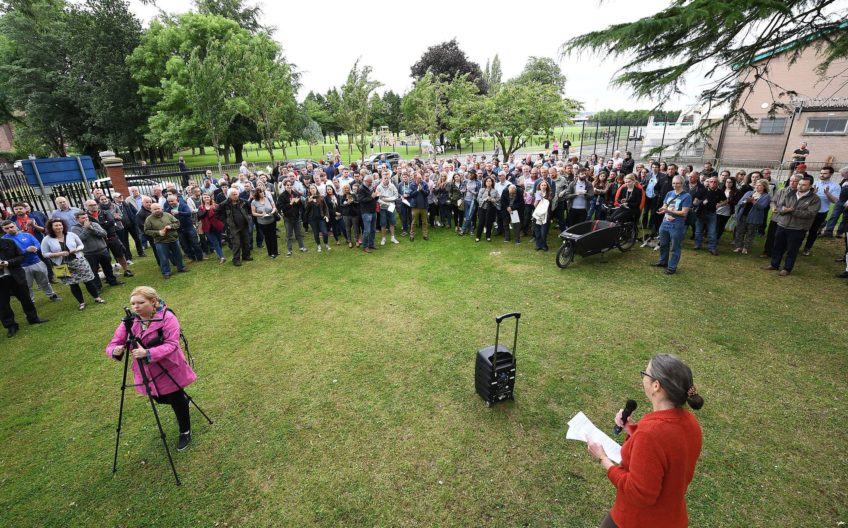 There are defining moments, some would say tipping points, in the long journey towards a shared and diverse Belfast.
Many go unnoticed and are only appreciated in their aftermath. They come dripping slow.
Others are announced with fanfare amidst much celebration and adulation. Indeed, quite a few have come at election times.
However, my favourites are those instances of change – Rosa Parks moments, I call them — which arrive unheralded but nonetheless bursting with promise.
One such inflection point in our oft-challenging long march came on Friday evening when residents of South Belfast gathered in Cherryvale Park to take a brave and unprecedented stand against paramilitaries.
Over recent weeks, loyalist paramilitaries have been using flags to mark out territory and to intimidate Catholic, and indeed other, families living in a new social housing development off the Ravenhill Road in South Belfast.
Global Crescent – so-named to highlight its mission as a mixed and shared housing estate under the Executive’s flagship Together Building United Communities programme — has a small minority of Catholic families who were in dire housing distress before being moved to this ‘cross-community’ street. The loyalists who put up the flags, including UVF emblems, share a common purpose with a gang of men who erected Union flags along the Ormeau Road on Tuesday past — against the express wishes of the vast majority of local people be they Catholic, Protestant, Muslim, Hindu or none of the above. Both groups want to turn back the clock to a fearful and divided Belfast when their rule was unchallenged.
The Ormeau-Ravenhill area is the most diverse and shared area in Belfast due to the tireless efforts of local people who refused to be pushed apart, even in the city’s darkest hour. But until now, no-one had stood up to say ‘stop’ to the paramilitaries. 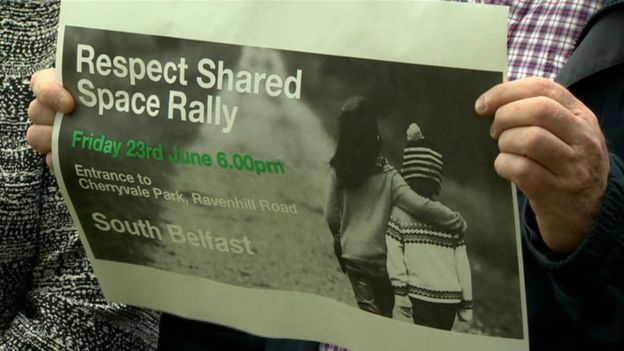 That changed on Friday night when a crowd of some two hundred joined together in their local park to demand shared space and shared communities be respected.
The PSNI, Belfast City Council and political leaders have an obligation to stand four-square behind these brave residents who have voiced the views of the majority who until now had been cowed into silence.
For too long, many of those with the power and influence to stop the bullies have instead, by their silence and inaction, enabled their ugly activities.
In her address local woman Dominica McGowan, who launched an online petition against the flag gangs, said the rally was only the start of the fightback for the vital principle of live and let live.  She said: “Many people perceived the hoisting of UVF flags as the final straw. I don’t think any of  us assume a petition and a rally will sort this out but we have a right to be heard. We will take this forward with the clear understanding that we want change.”
Rosa Parkes couldn’t have put it better.